The following 1:55 clip is the original evidence I received from the Coconino County Sheriffs Department.

The following video was a discussion that took place concerning this evidence the day I released it.

The above dashcam footage was some of the last pieces of evidence to be released by the investigating authorities during this investigation. It is important to note that it was not included with the original evidence I ordered from the Coconino County Sheriff’s office two months prior. Although there was reference made to this video evidence in the Sheriff’s report and a truncated, much shorter (17-second) cell phone recording of it was made available to the immediate family within a week of the incident, the actual evidence obtained by the sheriff department from the witness who provided it was not put into evidence until approximately two months later.

How I obtained this video

I first became aware of this video a little over two months into my investigation. While speaking with Isaac Kappy’s mother I was informed that the immediate family was provided a short (17-second) recording of Isaac sitting on the Transwestern overpass just moments before he died. The Kappy’s offered to send me the clip so I could examine it in detail. Upon receiving it I organized an in-person meeting in California with all the members of the research team. During our meeting, I revealed the new evidence to the team in person. It was there that one of the members realized that the file was actually a recording shot from a cell phone and that there was in fact another original and longer recording somewhere.

Upon learning this I called the Coconino County Sheriffs Department and informed them that I was in possession of a 17-second clip and that I was aware that this piece of evidence did in fact exist. After verifying that this evidence existed I was first informed they could not release it to me because the evidence belonged to another investigational body, namely, the Camp Navajo National Guard. I informed them that they had already released it and it was listed in the report itself so it must be in the evidence bin.  They then agreed to send it to me however after a week I still hadn’t received it in the mail. It was then I called the Coconino County Sheriff’s office again to question why as it should have only taken a couple of days to reach me from Flagstaff. I was immediately put in touch with officer Matt Freshour. Officer Freshour apologized and simply said that it never got sent. He then asked for my email address and told me he would simply email me a download link to the video. I thanked him and within minutes received an email from him. In that email was the download like to the original 1:55 video the CCSD received from the Camp Navajo security patrol driver.

The email I received from Officer Matt Freshour 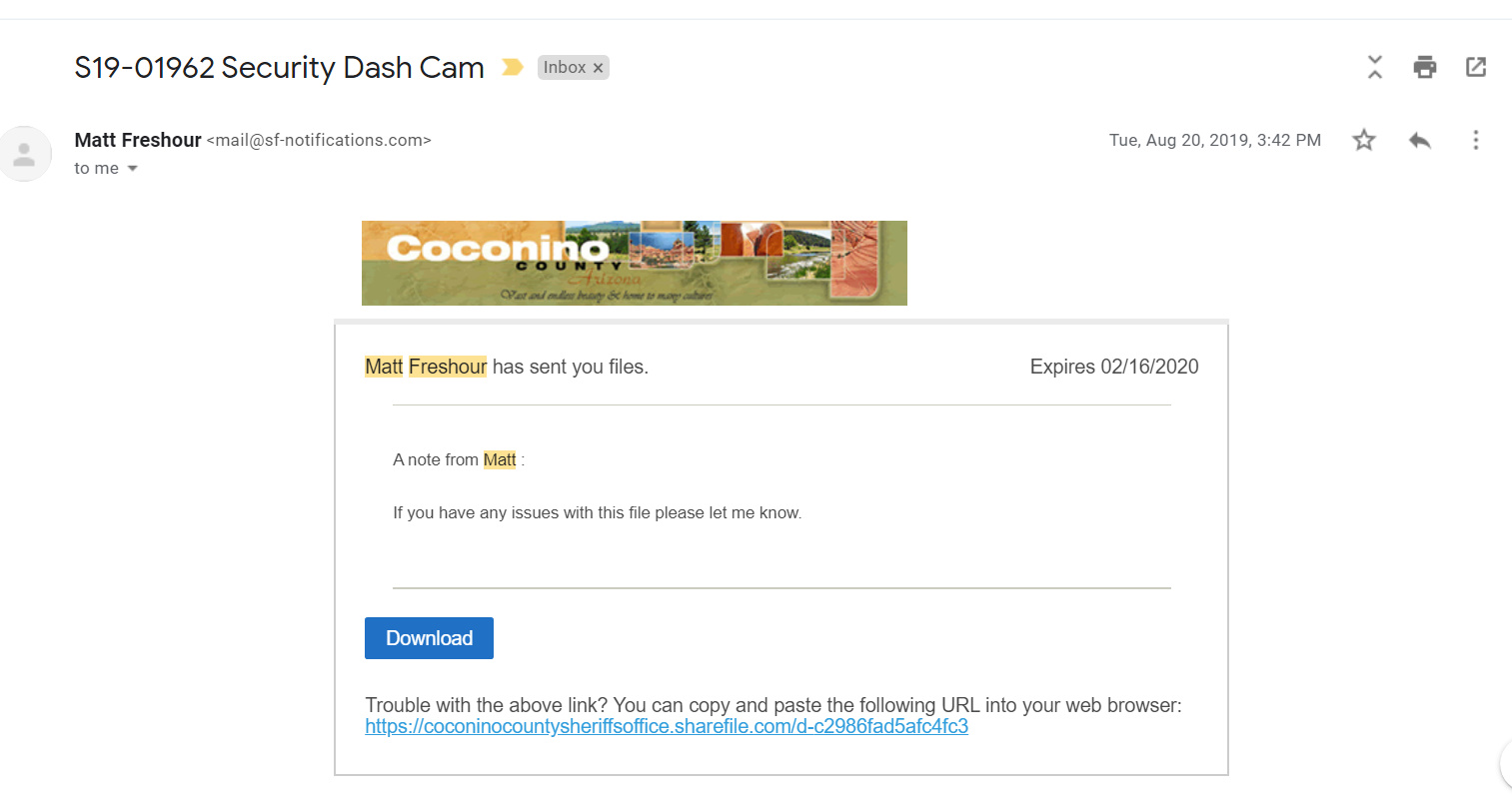 It is not an exaggeration to say that this is easily the most highly suspicious piece of evidence released by the authorities in the course of this investigation. Upon releasing this video on YouTube and my Twitter feed I estimate that there was approximately a 90% rate of organic suspicion concerning the footage itself. Other YouTubers subsequently released the footage with similar responses. One of the only channels to find no suspicion with the footage was LiftTheVeil who used the evidence to strengthen his narrative, which is also the official narrative has put forth by the authorities. To be fair, one member of my research team also feels the video is authentic and not doctored in any way. (yes, I attempted to maintain a balanced team throughout this investigation)

Something EXTREMELY strange and suspicious.

As you can see from the above email I received from Officer Matt Freshour at the Coconino County Sheriff’s Dept, I received the Camp Navajo dashcam footage via an email download link on August 20, 2019. Although this piece of evidence was supposed to be mailed to me in hard copy, DVD format, the Sheriff’s offices failed to do so a week prior which ended up delaying my receiving it by 7 days. The day I received the evidence via the above email ended up being the EXACT SAME DAY THAT ADOT BEGAN DEMOLITION OF THE TRANSWESTERN OVERPASS.  Ergo, the dashcam evidence was delayed going out until after construction of the overpass began. Could this be a coincidence? I suppose so. But given all the other suspicious aspects of this piece of evidence, it seems to fit a pattern. A pattern that smells like a coverup if I were to put it bluntly.

We know a couple of things in regards to this video.