De-Occulting the Sacred Physics and Ancient Technology of the Royal Crown.

Royal Crowns are more than just a decadent display of wealth and privilege. They are energetic weapons.

When William Cooper penned the term “Quiet Weapons for Silent Wars” in his book Behold a Pale Horse, most people had no idea that energy weapons had already been employed for hundreds if not thousands of years. For those of you who’ve seen the Stargate movie and series, you’ve already been desensitized to this knowledge. In the movie, the alien overlords who rule their respective planets use advanced technology to control and subvert their populace and enemies. Little do most people on Earth know, however, is that this is not fiction.

It’s also interesting to note that the entire storyline is Egyptian based complete with its entire pantheon of gods. This is extremely interesting, as it relates completely with the British royal crowns.

We tend to think of energetic weapons as a new technology that emerged after the discovery of electricity. It would surprise most, however, to learn that mind and mood-altering technologies have been around for much longer than most realize and have been employed regularly in the efforts to control others.

Commoners (non-royalty & non-elite) take it for granted that most everything royalty does is an act or performance of privilege and decadence. From ceremony to extravagant clothing and jewelry, I am here to tell you that there is purpose behind every bit of it.

AND THAT PURPOSE IS CONTROL

This control goes way beyond the class hierarchy and display of monetary wealth. I am asserting that these very crowns are energetic weapons.

The George IV State Diadem, also known as the Diamond Diadem, is worn by the Queen to the State Opening of Parliament; the Queen also wore it in the procession to her coronation. It has appeared in portraits and photographs of the Queen, and she is shown wearing it on the money of many of the Commonwealth countries. The diadem was commissioned by King George IV in 1820 and created by the Crown jewelers Rundle and Bridge. It includes 1333 diamonds weighing in excess of 320 carats, including a four-carat yellow diamond. Between the crosses are roses, thistles and shamrocks, the flowers of England, Ireland, and Scotland.

In numerology, the vibrational signature of the number 13 resonates with that of rebellion, while 33 is the most sacred number.

Both 1 and 10 represent the number of the creator or God. Fitting for someone representing complete control over his/her populace.

All of these numbers are base numbers of power in the occult and are revered by many if not most religions and occult societies throughout history to today.

With 81 pearls in this band, it imparts specific energy. Fundamentally that of the number 9.

3 = the Holy Trinity as well as the Masonic Blu Lodge.

9 = is a study unto itself and represents action and infinity.

27 = is considered a perfect number and is sacred to ancient mystery schools.

81 is simply an extension of this energy.

Mercury’s orbit around the Sun takes 87.97 or 88 days. The shortest of all the planets in the Solar System.

It is worth noting here that: Mercury is tidally locked with the Sun in a 3:2 spin-orbit resonance, meaning that relative to the fixed stars, it rotates on its axis exactly three times for every two revolutions it makes around the Sun. The very motion of Mercury is based on a 3 to 2 ratio. 11 & 22 are 2 of the 3 Master Numbers.

The George IV State Diadem wields the Energies of Mercury

Along with ancient Egyptian tech, the energetic and numerical vibrations of Mercury is the driving frequency behind this crown.

First things first. Mercury is the messenger of the Gods, the go-between, The deity who communicated between the Gods and mankind. The planet Mercurys indeed the closest to the Sun, or the “giver of life.”

Isn’t this the definition of royalty? The Divine Right to Rule. The God/man go-between. And isn’t this also what the Egyptian Pharos were considered? Now that I think of it, the Pope as well.

The divine right of kings, divine right, or God’s mandate is a political and religious doctrine of royal and political legitimacy. It stems from a specific metaphysical framework in which the king (or queen) is pre-selected as an heir prior to his birth; by pre-selecting the king’s physical manifestation, the governed populace actively (rather than merely passively) hands the metaphysical selection of the king’s soul – which will inhabit the body and thereby rule them – over to God.

Mercury’s influence is found both in the yellow-colored diamond as well as the numerology entrained into the crown.

The divine names associated with Mercury all have numerological values of 8 or 64. The name of the intelligence of Mercury has a value of 260, and the name of the spirit of Mercury has a value of 2080. These values are calculated by writing out the names in Hebrew and then adding up the value of each included letter, as each Hebrew letter can represent both a sound and a numerical value.

Yellow is the color of intellect, computers, communication, audio, video, TV, electronics, books, and literature, or, (the power of the air). Yellow rules the solar chakra of will. Yellow is ruled by the planet Mercury and lends its frequency to pass exams, improve the mind, deep concentration, mental power, ability to learn, speeches, writings, publications, communication problems, gossip, slander, interviews, brothers, sisters, neighbors, noise, theft, all areas of study and communication, including astral projection.

Yellow may be used to incite disloyalty, cowardice, decadence, sickness, death, madness, and inconsistency in others. Yellow rules the element of air as well as the solar plexus chakra.

Is this what is meant by the “Prince of the Power of the Air”?

This 4-carat diamond also sits atop an unfolded 8-sided pyramid. (Which the Great Pyramid is)

Funny how everything in the British Royal family goes back to Germany and Egypt. If you didn’t know. Today, all the members of Britain’s Royal family are of German descent.

Does Mercury resonate with Egypt and the Pharos who ruled over it?

The Sigil for Mercury

Anka as an Electric Oscillator 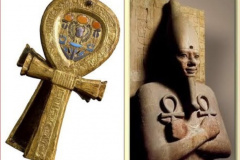 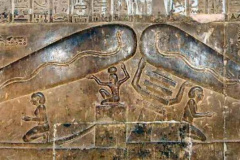 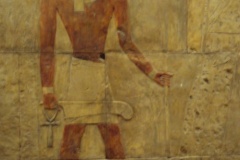 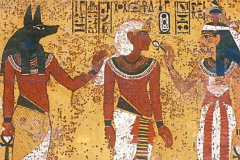 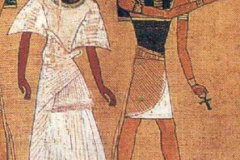 Now let’s break down the Macro numerology embedded into the crown.

So again we see an 8 sided pyramid broken into 4 components.

Four is a grounding number. Period. It has everything to do with stability and tangible 3-dimensional work. This 4-carat yellow diamond sits front and center the crown projecting stability and structure.

Here on the crown, we see 4 crosses and 4 bouquets for a total of 8. Remember that the bottom ring of pearls counted 88. OR, A doubling of the energies this crown was built to embody and project.

What first came to mind when I discovered this was the Tribute Lights at the Freedom Tower. These stood in place of the Twin Towers for 33 days after the towers fell and consisted of 2 banks of 44 bulbs. For a total of 88 lights shining into the heavens.

To commemorate the relatively recent creation of the United Kingdom of Great Britain and Ireland, King George IV, came up with a new motif: a bouquet of Scotland’s thistle, England’s rose, and Ireland’s shamrock.

Thistle – The thistle is the symbolic flower of Scotland since before Christian times. At one point in Scottland’s history, Viking invaders were halted in one of their attacks upon Scottland when they had to cross a treacherous patch of this formidable plant.

The Order of the Thistle is an honor bestowed by the Queen and carries the motto, nemo me impune lacessit (“No one attacks me and gets away with it”) The Thistle is an emblem of protection and carries with it the frequencies associated with breaking curses and malevolent spells.

Rose – A study unto itself, the rose is one of the most important flower symbols in the world pervading all cultures and religious beliefs. The reasons for many of these beliefs are shrouded in mystery still today.

Although the rose most certainly symbols love it is also heavily associated with secrets. And more importantly the harboring and unfolding of secrets. This is because of the way the rose blooms from a tight bud to one of the most stunning and fragrant blossoms in the world. To speak of something sub rosa – “under the rose”-means that information must be kept confidential. Hence, the secret order of the Rosicrucians.

Before cultivation Roses had 5 petals, from this we get the pentagram and the numerology that accompanies it. However as it relates to this crown and the Royal family of England, I believe the associated symbolism is as follows.

The rose is a natural mandala or wheel, the layers of the petals describing a perfectly symmetrical circle around its yellow center, itself reminiscent of the Sun.

Shamrock – The symbol of protection, fertility, and abundance. Used to ward off witches. Also symbolizing the trinity in its standard 3 leaf form. Finding a 4 leafed clover or Shamrock means the bearer will be able to see and protect from fairies and witches and recognize evil spirits as well.

A cross pattée (or “cross patty” or “cross Pate”, known also as “cross formée/formy” or croix pattée) is a type of Christian cross which has arms narrow at the center and often flared in a curve or straight-line shape, to be broader at the perimeter. The form appears very early in medieval art

The word pattée is a French adjective in the feminine form used in its full context as la croix pattée, meaning literally “footed cross”, from the noun patte.

This is, as we’ve already pointed out, a flattened pyramid.

We see that there are 4 sets of the Thistle/Rose/Shamrock on the crown. This makes a total of 12 representations of the UK’s 3 respective botanical symbols. All of which are positioned in a ring.

Jesus was the Sun/Son and lived 33 years. Of course, the entire crown is tuned to the energies and frequencies of Mercury and is worn by the intermediate between God and Man.

This implies that only divine authority can judge an unjust monarch and that any attempt to depose, dethrone or restrict their powers runs contrary to God’s will and may constitute a sacrilegious act. AND

This arrangement is nearly identical to that of the Pharos

I have stated for years that the United States is the latest incarnation of the Egyptian system which began it all.

This crown literally empowers and protects the wearer with the ancient vibrational energies to which it has been tuned.

Thank you for doing what you do! I want to plan a trip and have you be my guide. What would that entail? I want to see caves in the Grand Canyon