(Number of the Sun)

It is this authors opinion that Gnosticism is at the heart of all of the numeric coding in the Bible. This includes stories, allegories, and parables as well. From the astral-theological perspective, nearly every numerical reference in the Bible encodes deep ancient knowledge including physics, biology, and chemistry. The number 36 is deeply linked to the sun and this knowledge has been carried forth through the magic solar square. 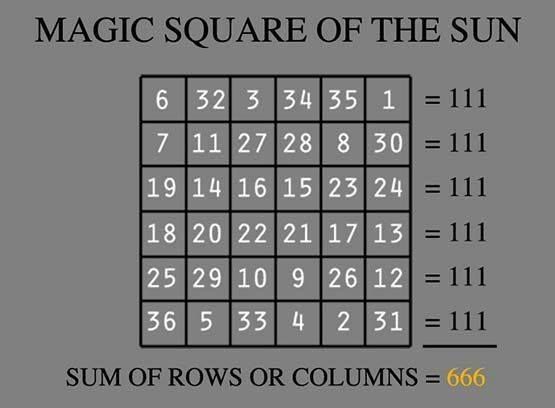 As a mystical concept, the number 36 is even more intriguing. It is said that at all times there are 36 special people in the world, and that were it not for them, all of them, if even one of them was missing, the world would come to an end. The two Hebrew letters for 36 are the lamed, which is 30, and the vav, which is 6. Therefore, these 36 are referred to as the Lamed-Vav Tzadikim. This widely held belief, this most unusual Jewish concept is based on a Talmudic statement to the effect that in every generation 36 righteous “greet the Shechinah,” the Divine Presence (Tractate Sanhedrin 97b; Tractate Sukkah 45b).

The Lamed-Vav Tzaddikim are also called the Nistarim (“concealed ones”). In our folk tales, they emerge from their self-imposed concealment and, by the mystic powers which they possess, they succeed in averting the threatened disasters of a people persecuted by the enemies that surround them. They return to their anonymity as soon as their task is accomplished, ‘concealing’ themselves once again in a Jewish community wherein they are relatively unknown. The lamed-vavniks, scattered as they are throughout the Diaspora, have no acquaintance with one another. On very rare occasions, one of them is ‘discovered’ by accident, in which case the secret of their identity must not be disclosed. The lamed-vavniks do not themselves know that they are one of the 36. In fact, tradition has it that should a person claim to be one of the 36, that is proof positive that they are certainly not one. Since the 36 are each exemplars of anavah, (“humility”), having such a virtue would preclude against one’s self-proclamation of being among the special righteous. The 36 are simply too humble to believe that they are one of the 36.