Isaac’s connection to Voodoo Donuts is Vegan Mikey. Vegan Mikey got in touch with Nathan Stolpman with the Lift the Veil YouTube channel and told his story not long after Isaac blew the whistle on Hollywood.

Shortly after this, Vegan Mikey reached out to Isaac and they began a friendship. Because VM claimed to be an SRA survivor and was blowing the whistle on a pedophile ring in Portland, it seemed a natural connection. Unfortunately, what Kappy thought would be a mutual friendship was anything but.

While Isaac assumed VM was an SRA survivor because Mikey told him so, that fact has never been established or proven. It is now my belief that Michael Whalen invented this history so as to fully immerse himself into this new reality and live the grift. VM had lost custody of his kids, home, and couldn’t find work. Although VM denies it to this day, he is a drug addict. We have confirmation on this. I’ve spoken with a trusted verified source who informed me that they had a 2+ hour conversation wherein VM not only admitted to being addicted to heroin, but wanted to get help. They discussed this at length. I was also in direct contact in a working capacity with Michael Whalen (VM) for the better part of 3 months wherein he exhibited all the characteristics of a drug addict. Michael Whalen’s primary goal is procuring money for his habit. The destruction I witnessed him inflict upon Isaac’s surviving friends was massive and constant the entire time he was among the Famalam. For a full & detailed expose of Michael Whalen’s scams and grifting please see here, as I have dedicated an entire section of this mindmap to documenting it for the sake of the world who has to coexist with this miserable POS.

Unfortunately, Isaac had no idea of any of this at the time and took Mikey under his wing. From here VM received money and resources from Isaac and the Famalam and Mikey operated on Isaac’s periphery.

For the record, and in full disclosure. I do not like Vegan Mikey in the least. I’ve dealt with him first-hand for over 3 months and can testify that he exhibits every trait of a drug addict. He knowingly and willfully hurt people I have grown to love, and he has never once apologized to anyone for his actions.

Still, this does not necessarily mean that what he claims isn’t true, at least in part. I do find it interesting that the owners of Voodoo Donuts never filed suit against him. The answer seems obvious. DISCOVERY. This is also the same reason no one ever filed suit against Isaac. It is also true that the majority of SRA victims have drug and alcohol problems and this is almost always used against them and their claims.

Allegations of Pedophilia in Portland OR.

Alligations that Voodoo Donuts was involved in Pedophilia stemmed from a man known in social media as “Vegan Mikey” whose real name is Michael Whalen. Mr. Whalen first appeared on the Lift The Veil YouTube channel wherein he recounted his story of witnessing the abuse of minors at a house party of one of the owners of Voodoo Donuts, Tres Shannon.

He claims that he was an eyewitness to children being taken into back rooms and being abused. When he made his dissatisfaction known and tried to leave, he was stopped by 3 of his friends. He states that the group of friends he was involved with were, in fact, part of a larger group of people who were involved with the Voodoo Donut-based pedophilia network.

An Open Letter to Macaulay Culkin from Michael Whalen (VeganMikey)

This is Michael Whalen’s open letter to Macaulay Culkin which relates to Voodoo Doughnuts and #Donutgate. Michael first read the letter live on Periscope and I covered it on YouTube adding some background details.

An open letter to Macaulay culkin

You are in a unique position. You are in a position to expose what we both know is going on, and to turn the tides against the abuse of children active in the club scene and at vodooo donuts here in Portland. We both know that you know exactly what I’m talking about, and who is responsible. Or you can ignore me, and allow this barbaric practice to continue. Do you participate in these activities? Were you going to “enjoy the party favors” in the basement of that party as I was told others were? Do you and Scott engage in the special “coffin fittings” he likes to brag about? Do you and Tres Shannon share the “magic in the hole”? When Wendy and Kayla said that “everyone here has other appetites” did they mean you as well? Or do you just passively sit by and allow this to happen? Those are the only two options.

I’m not famous, I’m not popular, I’m a nobody. But you know me. And you know all the same people I knew. You knew what was going on when we took the tunnels together being led to “gathering”, and you knew what was going on at that party. You knew before I ever found out. So I know I’m easily written off as somebody that you were made brief acquaintance of, and in any other circumstances I could be shrugged off, but not in these circumstances. Not with the activities that took place.

Were you abused as I was, or worse? Did they target you because of your abuse, as they did me? Did they encircle you and surround you like vultures to a corpse in order to offer you the things they thought would tempt you? Did you take those temptations? Why IS your band called pizza underground? Why does your apparel embrace occult themes and satanic imagery? I understand more than most that with symbols and images they can be used completely innocuously, or nefariously, and in conjunction with what I know about the company you keep, a picture starts to form. How is Seth these days by the way? Why when you sat down with red letter media did jack wear a shirt with a pizza slice with an all seeing eye atop of it? Do you think that’s funny?

You have the power, maybe the singular power, to expose what you and I know occurs from the donut shop, divey clubs, and the catacombs of Portland, to the gilded mansions of Hollywood, and the mountains of our political power structures. Why have you not addressed it? What do they have on you? Do you not think it worthwhile, even if you participated in the same activities that we know occur, to end the cycle of abuse and come forward? Do you remember what it was like to have your innocence stolen? The sinking in the pit of your stomach when they approached with hungry eyes? The dazed and deletions feeling of the treats they give to an excited child manipulating your ability to defend yourself? Like the donuts that are given to the children here in Portland? Do you not wish to make sure not one more child has to endure what we’ve suffered? Cleanse yourself of these associations and stand with me, to tell of what we know happens here. And what I can only imagine is a wealth of knowledge on what you know occurs in Hollywood.

I’m just a nobody. But I’m a nobody who was allowed into the inner circle of your group of hungry friends that like a “lonesome pizza”, that like to bake poisonous deserts, and move from D.C. to the pacific north west to manufacture children’s coffins. Who like to mix sedatives into frosting and call it “Kat daddy cream”…So I’d rather be a nobody than a somebody with those type of friends. I welcome you to shake off the shackles of being somebody, and be somebody worth a damn.

Yes!!! The same Seth Green Isaac Kappy called out for Pedophilia. What are the odds that these two are besties and independently called out.

The Pizza Underground Band is a “Comedy cover band started by Macaulay Culkin. It is a Velvet Underground cover band. I can’t help but notice the pedophile code describing “Velvet Pizza” or “Soft little girls”

These were some of the original photos put out by VooDoo donuts before they were removed for obvious reasons and replaced with photos of older scantly clad female models. 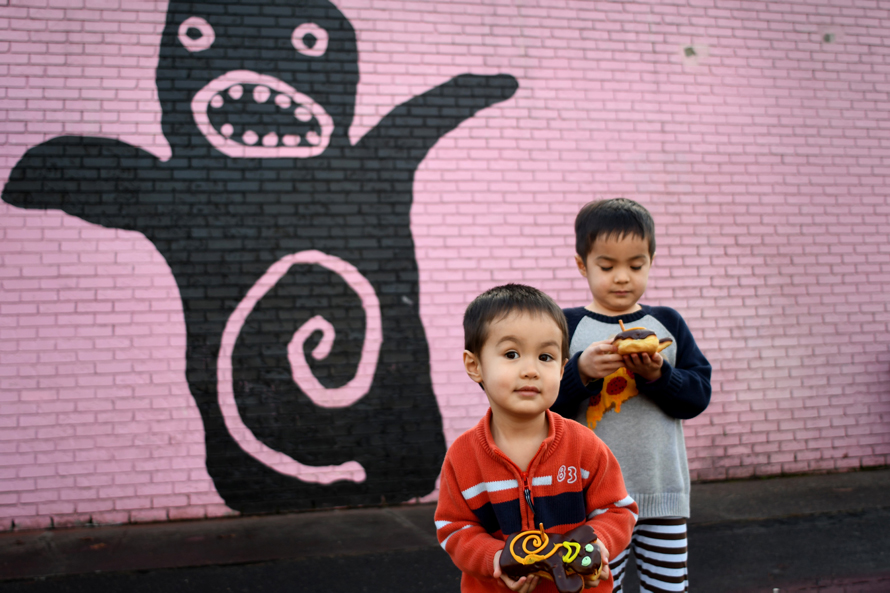 Sick! Our children are not safe. Hell is real and these unrepentant demon-possessed predators will learn soon enough that no one escapes God’s justice. Is Caulkin in or out?