I saw a human pyramid once.

It was very unnecessary.

Pyramids in AZ? You bet!! For those of you “Zonies” out there, you’ve no doubt seen a few of these. Although not hidden, many of these go unnoticed as they are not the traditional Egyptian or “square” style pyramid most think of when they hear the word “pyramid.” Still, many of them are, and their presence is highly obvious. But for all these pyramids, most people still don’t know the stories behind them. For those who do, most dismiss them as “quirky” monuments or local “oddities.” But one digs down just a little they will begin to uncover the history which firmly pegs the majority of these structures to Freemasonry and occulted knowledge.

Of all the websites highlighting the “quirky” or “odd” pyramids of Arizona, none of them are complete and each has missed the deeper meaning of what once transpired at those sites as well as what continues there today. With the exception of The Phoenix Enigma, every site dealing with this material is affiliated in some way with the travel industry or tourism and provides only “bubble gum” history and “fun facts” which the masses have been trained to devour in place of meaningful sustenance.

Like other Masonic structures in the Valley of the Sun, “SOME” of the pyramids below have been constructed with the primary intent of marking territory, telegraphing alliances and even manipulating subconscious thought processes.

That being said, there are other pyramids which have nothing to do with Freemasonry and are the product of personal predilection. After all, sometimes a cigar is just a cigar, however, as past administrations have proved, an intern is rarely just an intern.

Below you will find all the pyramids in Arizona which I have identified. Some of them, I have spent months researching and have covered extensively in their own respective articles as the complexity of this phenomenon and the history which surrounds it required as much. When having done so, a link to the article has been provided.

Please note there are 5 pages to this article. 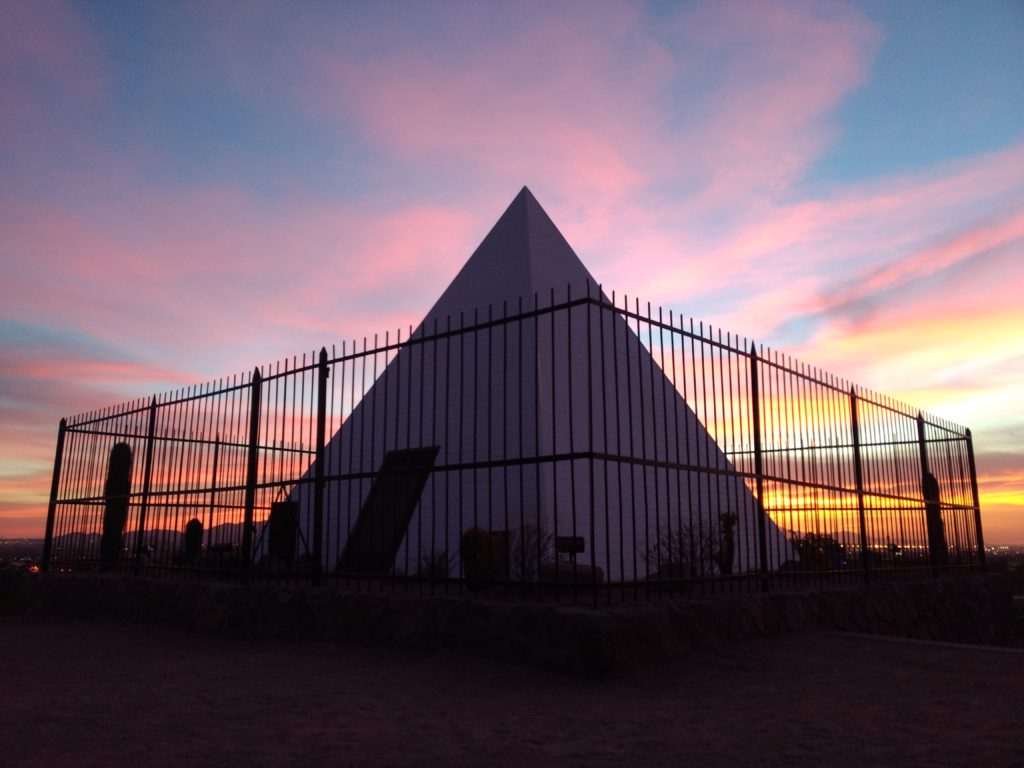 This first pyramid on our list is actually a “Capstone.” Located in the heart of Papago Park, where the cities of Phoenix, Tempe, and Scottsdale meet, sits the shining white tomb of George W.P. Hunt’s, also known as “Hunt’s Tomb.” True to the aesthetics of the Egyptians who covered their pyramids in white limestone as to be visible from up to 50 miles away, Hunt’s tomb is finished in white tile and shines brightly under the Arizona sun.

Most every website highlighting this local Phoenix attraction labels it simply as a “historical oddity” and I can’t tell you how this infuriates me. It exemplifies the pervasive apathy of the general public’s desire for truth as much as the writer’s dedication to his/her craft. Even the website put out by the City of Phoenix Parks and Recreation mention nothing about the fact that the first Governor of Arizona was an high ranking Freemason who not only decided to entomb himself and his family in an Egyptian style Capstone, but that he actually oversaw every dedication ceremony of every Masonic lodge founded across Arizona during his time. Popular material on Hunt’s Tomb also fails to recognize the fact that it is located upon an ancient Hohokam astronomical site, most likely used by the Priesthood.

I once believed like everyone else that Hunt had constructed a Pyramid tomb because of some predilection to Egyptian aesthetics or trends at the time. But my research has led me to understand that the size of the tomb is the exact same size of the “Capstone” or “Pyramidium” which once capped the Pyramid of Khufu also known as “The Great Pyramid.” This is the primary symbol using Freemasonry upon which most of their esotericism is based. The capstone represents the highest point, the highest achievement or the most important action and a series of actions. Even the platform the upon which the Pyramid is built is laden with Masonic symbolism and numerology.

It is often written that Gov. Hunt explained that he built his tomb on top of a hill overlooking Phoenix because he wanted his final resting place to overlook “The splendid Valley.” What nobody realized is Hunt was likening the Salt River Valley to “The Splendid Valley” in Egypt. And yes, for those with the “eyes to see and the wisdom to understand” this was a Masonic reference.

About eighty miles by river above Cairo, nearly due west of Beni-souef, a deep sinuosity in this chain forms the splendid valley of the Fayoum, which has been justly called the Garden of Egypt. The most fertile tracts of the Delta fall below this specially favoured dis- trict, which, abundantly watered by an artificial cut from the Nile, and a complete network of canals, blooms over its whole area of nearly 700 square miles, with the most varied luxuriant vegetation. The Fayoum, in fact, enjoys a pre-eminence as to soil and products over nearly every other part of Egypt. Besides yielding rice and grain in equal abundance with the other provinces, it abounds in dates, flax, cotton, the vine, and almost every variety of fruit. It is also famous for its plantations of roses, the rose-water from which forms one of its chief exports to Cairo and the Levant.

In Gov. Hunt’s time, Phoenix was an agrarian region. This subtle, passing reference to a region of Egypt which also contain a network of canals, cotton farming, grain, and many variety of fruit is not by accident.

For more information of Hunt’s Tomb and Governor Hunt himself please see my research here. 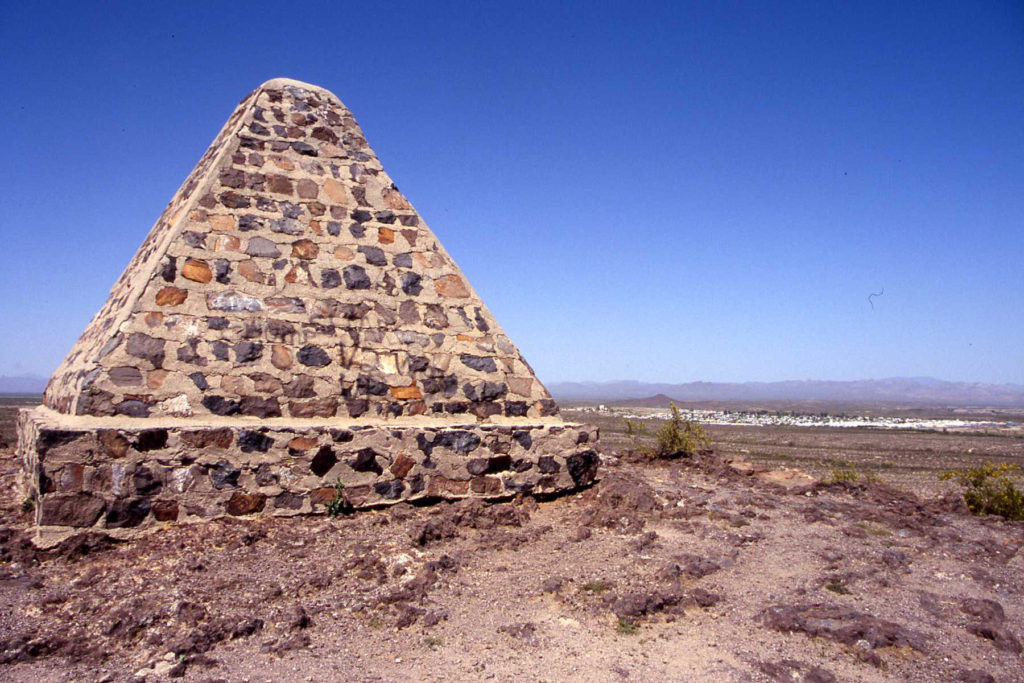 Located southeast of Phoenix just north of the town of Florence, AZ atop a small hill along Hunt highway sits the tomb of Charles Poston. Although, initially buried in a common grave in Phoenix, upon the 100th anniversary of his birth his remains were exhumed and moved to this location atop “Primrose Hill” soon to be renamed “Poston Butte.” It was this hill Poston attempted to build his “Temple of the Sun” years earlier after converting to Zoroastrianism. The official ceremony was led by none other than high ranking Freemason, Governor George W.P. Hunt. (Listed above)

I find it strange that although many have written about both the tombs of Poston and Hunt, all fail to note the connections between the two, and both are always explained away as quirky frontiersmen who had an affinity for Egyptian pyramids.

What was really going on here? Whatever Governor Hunt knew about Poston has died with him, but that there was a personal connection between the two is blatantly obvious. Seeing that their tombs are nearly identical, and located in a part of the world where they were and are seen as eccentric is also very telling that they may have been members of a private group or organization. 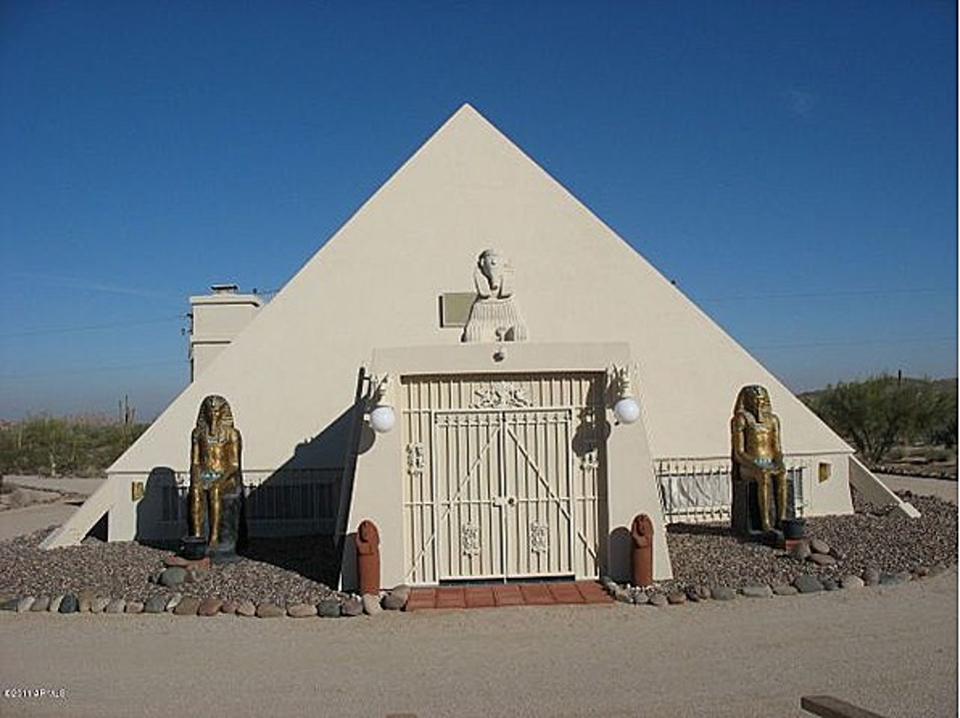 Known as “Arizona’s great pyramid” or the “Maricopa Pyramid” this 1988 constructed home was is located at 2457 South Warren Rd., Maricopa, AZ. It is a 3 bedroom, 2 ½ bath 2380 square foot build and contains a work area to boot. The homes bottom floor sits 6 feet below grade, in the same fashion, the Hohokam pit houses were built in the area a thousand years earlier. This is a simple yet ingenious design as it maintains an average cooler temperature of about 30 degrees in the summer. It truly is how everything should be built here in the desert. An eco-contractor friend of mine once told me “We don’t have an energy problem in the U.S. We have an efficiency problem.”

The Maricopa Pyramid was designed and built by its original owners who apparently had a thing for Egyptian culture and decor. It is flanked by two smaller structures which serve as storage units. The Owner said this was done so as to give the area the look of the “Three Kings Pyramids” on the Giza Plateau. The path leading up to the home is protected by two stone lions and the front door is flanked by two over-sized statues of King Tut, painted gold in color. Searches for this pyramid house will generate lots of real estate sites speaking of the, once again, “quirkiness” or “oddness” of this home, But once again, none of them make any esoteric connections. Of course, when it comes to Egyptian symbolism, everything eventually leads down the esoteric road.

That being said, is the general populace really this oblivious as to the meaning of ancient esoteric symbolism in our world today? Why is it so hard to imagine that the symbolism/energy systems which have been utilized for centuries by the ruling elite aren’t still being used in global institutions of business, education, finance, and nation building today? What is it that people have assumed has changed? Why does the mention of pyramids and energy in the same sentence draw forth patronizing smiles and eye rolling?

At the time of construction, the Maricopa House was built on 13 acres of barren land in the middle of the desert. Here we see one of the Freemason’s favorite numbers. And if you think that is perhaps just a coincidence, remember that the square footage of the home is 2,380sf. A simple reduction of that number reveals the number 13. A full reduction leaves us with the number 4 and that is how many triangle shaped windows allow sunlight to shine through onto the sarcophagus-shaped pedestal bed below.

Where the original owners of this home Freemasons? Who knows. I’m having a hard time even finding any information on this site other than real estate listings and travel blogs. Without a records search at the county recorders office, it’s going to be hard to dig up any more info on this one. Until then we can assume that due to the numerology and layout of the site, that the owners had deep motivation to build a pyramid home which they knew would be hard to resell should they ever decide to move. They obviously had a sizable knowledge of Egypt and its symbolism.